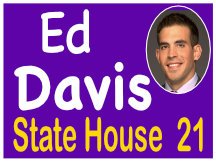 In this article, we will discuss both sides of putting a photo on a campaign sign.

Why You Should Put Your Photo on Your Campaign Yard Sign
Campaign yard signs are arguably the simplest, least costly and most popular ways to advertise a campaign. They are inexpensive to print, easy to distribute and offer publicity on a daily basis. This is even truer when those signs are unique and dynamic.

Catching a Voter’s Eye
The drive-by voter will notice political signs in yards regardless of their design or construction. The more frequently the signs appear, the more the voter will become familiar with the message. Unfortunately, signs advertising politicians often use the same format, font and even color schemes. Voters might not pay close attention to specific signs when they look like a dozen others they have already seen.

A photo on a political yard sign is the best way to create a unique message. Another candidate’s camapign will never have the same image on their signs. You are guaranteed an original look that makes a meaningful connection with potential supporters.

Making Politics Personal
It has long been argued that the most effective way to reach voters is to talk to them one-on-one. While this isn’t feasible for today’s campaigns for politicians and ballot measures, it is possible to make a personal connection.

Placing your image on a yard sign lets voters associate your name with your face. It makes them feel as if they know you. They are more likely to vote in your favor when they have that relationship.

Increase Name Recognition
Photo yard signs are of particular importance to new names on the political scene. You may not have the campaign funding to post regular election ads online or on television. You might not yet have the funding from a PAC who will cover the cost of these ads or large billboards. Instead, you can choose to purchase election signs that can be spread throughout a city, county or state.

The visibility given to you is vital, especially in low-information races. Voters rarely take the time to research candidates in local races. Instead, they often rely on word-of-mouth to inform their votes. Name ID can be the difference between earning those votes or losing them. Voters will remember your name when they see a sign that has a unique design and photograph.

Standing Out in a Crowded Political Landscape
Aside from local elections being low-information, there are also often many candidates running for office. Races like judge campaigns and school board are known for having far more candidates than most voters can track. Once again, this is when standing out is important.

Yard signs of all types encourage curiosity. People will stop to see whose name is present on the sign and what office they are seeking. They will be more apt to pay attention and remember that sign when a picture is present. A photographic sign that uses a 4 color process is sharp and eye-catching, which is what every candidate needs.

Relational Organizing at its Peak
Relational organizing involves volunteers reaching out to individuals they personally know. The argument is that relational organization is more effective than almost any other type of campaign strategy. Our belief is that voters are more likely to listen to a friend’s opinions and preferences than to those of a stranger.

Campaign yard signs are a type of relational organizing. Friends, family members and neighbors who see a campaign sign in someone they know and respects yard may be more impacted by that act than by any ad they see on TV. These signs also encourage conversation. A friend will feel more comfortable talking about politics with someone who they know is already open about their support.

Cost Effective Advertising
The low cost of 4 color process signs is one of the primary reasons’ campaigns use them in such large quantities. Unlike traditional ads, which cost your campaign every time they air, each sign has a one-time cost that continues to pay dividends every moment that it appears on a voter’s lawn. That 24-hour advertising is one of the most lucrative purchases your campaign can make.

Once again, this cost is made even more worthwhile when your sign has a personal picture. The one-of-a-kind, yet familiar nature of a campaign sign with a photograph does all of the advertising work for you.

Instill Pride in Your Volunteers
Your volunteers support you because they believe in you. They are excited to put signs up that display their choice in candidate. They are even more energized about signs when they display your smiling face.

The support doesn’t stop at yard signs. Those who are willing to put signs in their yard are also those who are most willing to volunteer for your campaign in other ways. They may offer donations, door knocking, phone banking, text banking and more. They can be asked to volunteer when they pick up the sign from campaign headquarters. Conversely, you can wait until they have had time to enjoy the benefits of a picture-perfect campaign sign before you call to ask for their volunteer time.

More Than Yard Signs
The world is becoming more and more virtual. People love posting pictures of their daily lives on social media platforms. During election season it has become commonplace to find the internet flooded with photos of campaign yard signs.

Thanks to this trend, the sign for your campaign does not solely reach the individuals who happen to pass by a yard. Instead, it reaches everyone who is connected to that person via social media. A photograph printed on a yard sign is the best way to break out from the sea of photos online and become a memorable advertisement that pays for itself.

Let me add one more reason to this opinion written by someone else. You might use your photo when you have a name like Pat, Devon, Jordan or Peyton. So if your name is Pat and you are a female and there is a 65% to 35% likely voter differential, you may want to show you are a woman on the sign.
Also, if a district is primarily one ethnic background and your name does not sound ethnic. So if a female candidate married a man named Jones and most voters in the district were Hispanic – then maybe you put your photo if you clearly have a Hispanic look to your photo. What is a Hispanic look? Not sure, but most would know it when they saw it.

Why not to print a photo on your campaign yard sign.

First, and most importantly, a photo takes up space on the campaign sign that can be used to make your name and office big and readable. It is our opinion that either the first or last name of the candidate should be the full width of the sign.
You cannot build up name ID if the yard sign cannot be read at 35 mph.

There are exceptions to this rule. If you have a one, two or three letter last name, we can create a campaign logo / design that will stand out and have a photo on it.

Remember, that your photo does not appear on the ballot ( in most cases ) so anything that takes away from your name is defeating the purpose of putting out campaign signs for your election.

Second, campaign signs with a photo are more costly to print than a one or two color campaign sign. Most campaigns just do not have the extra money involved ( 35% to 45% more). Although this price is coming down every day now that digital printing is catching up with screen printing on a price basis.
The exception to this rule is if you design your sign to be black and one other color, then you can print your photo in black. Never, ever, and I mean never print your photo in a colored half tone. It never looks good. Just makes you look like a cartoon character.

The third reason not to use a photo on your campaign sign is that it takes a lot longer to print. So, if your plan is to order 500 signs now, and to order 500 more signs when you raise the money to pay for the signs – it may take 2 weeks to get the signs printed and you have lost out on valuable advertising and building of name id.

Finally, there are some voters who may think you are just too full of yourself and not ever give you the chance because they think you are all about you. You are so self involved that you must put your photo on your campaign sign is not a great first impression for many.

The exception to this rule. If you are running just to build a name for yourself as a Realtor or something where you might later put your photo on your business card, then I can agree with putting a photo on a campaign sign. Another example might be a criminal defense attorney running against a popular judge so they do not have to appear in front of that judge any longer. Go ahead and add your picture.

Also, in this discussion we are just talking about yard signs. I am ok printing a photo on a large format campaign sign like a 32” x 48”, 4’ x 4’ or 4’ x 8’. You have plenty of room to add a photo, but the downside is that your signs are not consistent. Would Coke ever have two different designs for same product? No is the answer.

I hope we have provided both sides of the issue of whether to print a photo on a campaign sign.
If you want a great yard sign design for you campaign, give us a call at 407-617-4289

How many campaign signs should we order

How many campaign signs to order? There are four main factors when deciding how many…

How to make handing out signs easier