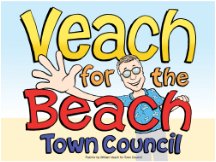 We did not design this sign, but I saw it on a Bob Vila page of all things in the background and contacted the candidate ( Bill Veach who won his seat for Fort Myers Beach Florida Town Council). I asked him if he thinks the sign helped him win the election.

He said it would be speculation, but thinks it did help him win. He said the sign was designed by Roy Schneider who is a former cartoonist and musician.

I think the design was a huge risk, only because the candidate might not be perceived as serious about the job.

But the sign is massively unique and memorable. It brings about a feeling of friendliness.

The voters overlooked my skepticism, but this could have been because Bill Veach was clearly the better candidate.

I think in this case the sign built up huge Name ID just because it was so memorable.

In this article, we will discuss both sides of putting a photo on a campaign…

Who is stealing the campaign signs?

Who stole my campaign signs?As a political consultant for more than 20 years, I don’t…