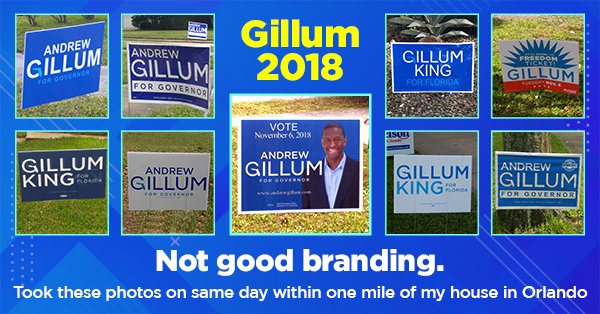 Will Joe Biden run his campaign as poorly as Andrew Gillum did?

I think this picture is an indication of how poorly the Gillum campaign was run and the amount of money that was wasted. To be fair, DeSantis had 3 different designs. The signs in this picture were taken within one mile of my house on the same day. Gillum also had at least one other sign for the primary which had that date on it as well.

If you are running for office use one sign design and use it as your logo on everything: signs, tshirts, handouts, direct mail – everything. It is just marketing 101.

Now some will say these signs were just produced by over zealous supporters. My comeback to that is that if they had a central location to get signs, this would never happen.

In this article, we will discuss both sides of putting a photo on a campaign…

We did not design this sign, but I saw it on a Bob Vila page…

2021 should bring us new political blood in Durham. When we have new candidates for…